What is the Difference Between Ordinary Bolts and High-Strength Bolts?

The difference between high-strength bolts and ordinary bolts is as follows:

3. From the perspective of force characteristics, ordinary bolt connections rely on bolt shear resistance and hole wall pressure to transmit shear force, while high-strength bolts, in addition to their high material strength, also exert a large pre-tension on the bolts to make the connection between the components Extrusion force is generated, so that there is a great friction force perpendicular to the direction of the screw.

High-strength bolt connection is to clamp the plate of the connecting plate through the large tightening pretension in the bolt rod, which is enough to generate a large friction force, thereby improving the integrity and rigidity of the connection. When subjected to shear force, according to the design and The difference in force requirements can be divided into high-strength bolt friction type connection and high-strength bolt pressure-bearing type connection. The essential difference between the two is that the limit state is different. Although they are the same type of bolts, they are calculated in terms of calculation methods, requirements, and scope of application. All are very different.

In the shear design, the high-strength bolt friction type connection is the limit state when the external shear force reaches the maximum possible friction force provided by the bolt tightening force between the contact surfaces of the plate, which is to ensure that the internal and external shear force does not exceed the connection during the entire use period. Maximum friction. The plates will not undergo relative sliding deformation (the original gap between the screw and the hole wall is always maintained), and the connected plates will be stressed as a whole by elasticity. 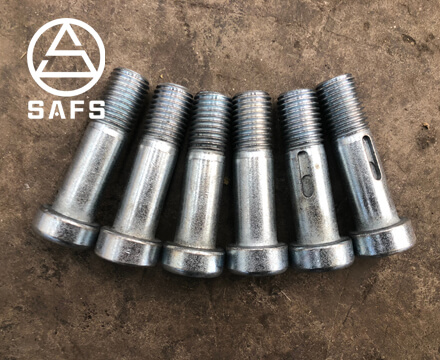 In the shear design, the external shear force is allowed to exceed the maximum friction force in the high-strength bolt pressure-bearing connection. At this time, relative sliding deformation occurs between the connected plates until the bolt rod contacts the hole wall, and then the connection depends on the bolt rod. Shaft shear and hole wall pressure and the friction between the contact surfaces of the plate jointly transmit force, and finally the shaft shear or hole wall pressure failure is regarded as the limit state of the connection under shear.

What is the general cost of a steel structure workshop?

What are the advantages of the new steel structure workshop?